So I was heading to Digital Mall a week ago and this caught my attention: 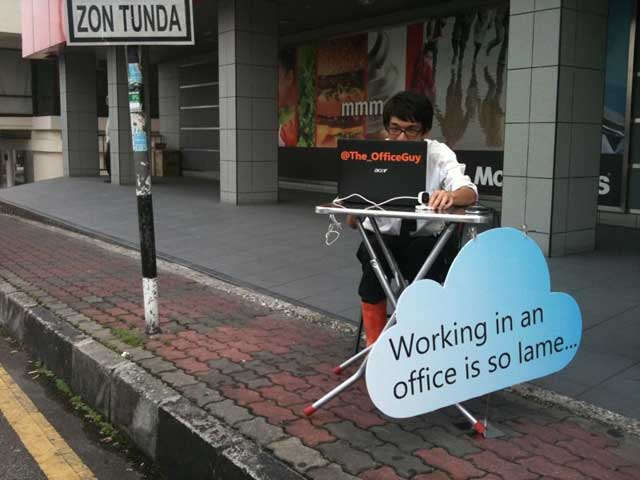 The guy was dressed in working attire, complete with a tie, in a pair of orange boots sitting by the pavement by a busy road. I moved on since I initially thought it was some flyer distribution gimmick but there were similar guys situated all around the area. They were pretty difficult to miss and I was totally intrigued with what’s the entire concept all about. I spotted the Twitter handle @The_OfficeGuy and decided to look him up.

So, the Twitter profile and the timeline did not say much about him. I dropped him a @mention and he introduced himself the same as in his profile. That made me wonder – if this is supposedly a promotional campaign (and I was pretty sure it is), why isn’t he promoting a single bit on the product / service? After observing the timeline for about a week now, @The_OfficeGuy is all about running contests and replying @mentions.

At this stage, I was determined to uncover this ‘mystery’ of @The_OfficeGuy. After several searches I found that it is actually a campaign by Microsoft – promoting their cloud solutions (that’s why the cloud is there) such as Office 365. 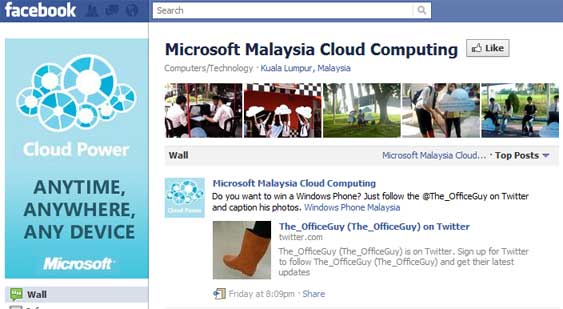 3 Things We Can Learn from This Campaign

#2: You put a face to your campaign

Microsoft managed to put a ‘face’ and a real-life scenario to its cloud solutions. This way, the promotion takes a more human and conversational approach without being in-your-face. Consumers had it enough when it comes to blatant advertising.

Here’s where I think @The_OfficeGuy should have done better. The campaign created curiosity and people (with Twitter) naturally began engaging with them but it would seem that not many decided to follow him. Why? I came up with 3 reasons:

1. People somewhat know that this IS a campaign. So why follow an advertisement channel?
2. All it does is to talk, talk and talk. What can I get out of listening to his conversations with others?
3. (Referring to the Twitter profile) What value can I get out of the misadventures of someone?

I can’t argue it’s capabilities in drawing curiosity and responses but if you can’t keep the consumers, you’re merely a shopfront display. It may be more effective if  there is a balance between the tweets – engagement vs providing value. You do not need to sell your product, but cleverly picking out its benefits and usage in an educational tone will do better.

There’s no need for expensive print advertisements. If your business has a targeted audience in a specific geographical area or even with limited budget, you may want to consider narrowing your promotional focus such as Microsoft. Concentrate on one location to build visibility and utilize social media platforms for engagement to take place. Your business may be the next talk of the town!

What do you think about the campaign? Are there areas that you think they’ve done well? Is there anything lacking?

Hello there! How’s your weekend coming along? Some weekend browsing allowed me to stumble across this and if you’ve always been wondering which of the 3 phones mentioned lasts longer on the grill, this video is made for you:

What’s interesting to note that this video is not made for sheer entertainment purposes – it is to promote a product called the EZGrill disposable grill. If you haven’t noticed, this video is going viral with about 9k views on YouTube since it was uploaded 24 hours ago. People all around the world are tuning in just to see 3 of the latest gadgets out there getting grilled helplessly.. and watching a live demonstration on how the EZGrill works!

A costly idea? EZGrill will need to sell more than 200 units to recoup the cost spent on the phones for this ad.
Will it be possible? At the rate it is going, very much so.
Should EZGrill give the phones away rather than grilling them? Nah.. The grilling cooked up a huge opportunity for consumers to see their product in action the fun (for some) and dreadful (for some) way. The hype builds faster this way, too!

So, what does it take to go viral?

Looking at EZGrill’s ad, I managed to pick up 2 simple points:

1. Pick something that’s current: EZGrill used the 3 most talked about gadgets – the Android G2, iPhone 4 and Windows Phone 7 as the main catch. They did not say “See how my EZGrill works and how awesome it is” but to use current topics to capture the attention of the consumers, then show them what the product is all about.

2. Do something unusual / drastic: They pulled something drastic as opposed to IKEA that went for the unusual route. EZGrill used 3 current items, did something drastic and that captured major attention and interest (and shock). Grilled phones? We don’t see that coming everyday.

There are definitely more ways to go about viral videos but usually the above two does it just right. I am personally interested to see how far this video will travel.

Did I miss out something from EZGrill’s video? I would love to hear them :)

Till then, fancy a barbecue, anyone?