2011 has been an amazing year in the digital realm. From the major Google Panda update somewhere in February 2011, to the design overhauls with major social networking sites such as Facebook, Twitter, YouTube and even StumbleUpon, the introduction of Google+, the beta launch of Kred and the list goes on.

What excites me most is that more and more businesses are seen to be adopting and experimenting on social media, leading towards exciting times for both marketers and consumers alike in 2012 – a concrete indication that social networking is indeed changing the way we communicate, do business and definitely not a trend.

Having seen all that, have you wondered what 2012 would be like for social media? Here are my four (4) predictions of social media in Malaysia for 2012:

Why: Social media campaigns have been prevalent in larger corporations throughout 2011. However, small businesses (known as Small-Medium Enterprises) makes up the largest business establishment in Malaysia with 99.2%, equivalent to 518,996 businesses in which the huge majority (86.5%) are in the services sector which includes retail, restaurant and wholesale businesses. (source: Census of Establishments and Enterprises 2005)

What does this mean: With larger corporations leading the way in 2011, the SMEs in Malaysia have tangibly seen the implementation and results of different online marketing campaigns and may emulate the success. On top of that, the nature of businesses in the services sector (especially B2C) can greatly reap the potential of social media networks.

If you’re a small business owner, here’s a bonus article on why your business benefits best on social media.

Why: Malaysians spent MYR 1.8 billion on online purchases back in 2010 . In 2011, there was a rise of e-commerce enabled websites (putting behind the usual blog layouts), electronic marketplaces (e.g. Mudah.my, AsiaAsiaMegastore.com), digital services (in government and private sectors alike), group buying sites such as Groupon and the recent opening of PayPal’s Global Operation Centre in Malaysia. To top it off, these businesses have been promoting their sites across social networking platforms using various methods with 94% of Malaysian online consumers using social networks as a guide to shopping (source: Nielsen Company). Before and After E-Commerce Integration: Online Fashion Entrepreneur – Soul Chic (from the MOFEW community)

What does this mean: Businesses in Malaysia are beginning to recognize the importance of using electronic mediums while consumers are experiencing the convenience of online purchasing. Having that said, consumers may grow and continuously seek social proof or recognition from their peers and businesses when making a purchasing decision.

Why: Existing local business pages on Facebook have been using similar strategies in building their presence using various promotional campaigns such as sweepstakes or contests in which will continue to grow. Having said that, competition will increase having to attract the consumers’ attention which may lead to the need for more innovative or integrated social marketing campaigns to break out from the norm.

Local businesses such as the above video are already innovating to be different from their competitors.

What does this mean: As business competition increases across platforms, the demand and expectations among consumers also increases. This demand may act as a requirement benchmark in which businesses have to keep up (or surpass) with, whether it is the level of engagement, method of engagement or even the tools of engagement.

Prediction #4: The growth of mobile 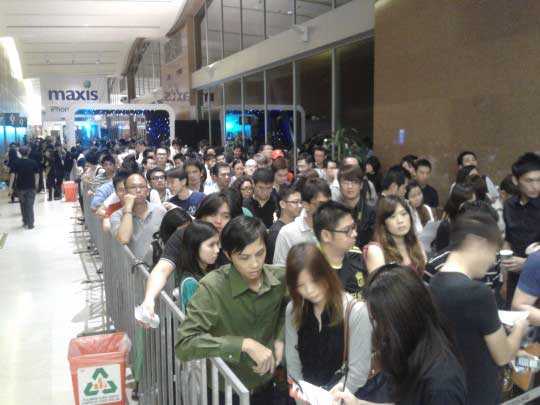 Thousands of people queuing at the launch of the iPhone 4s. Image source: www.yogaretnam.com

What’s even more interesting is that 83% of existing smart phone users are using free apps while 37% are on paid versions.

What does this mean: This suggests that the penetration rate of smart phone users are not as low we thought it has been and people with such devices ARE using mobile apps. We may be able to see a rise in the adoption of mobile driven / optimized websites, apps, mobile games or a wider use of quick response (QR) codes.

What do you think?