You may have heard of many stories on how powerful social media platforms are to drive causes such as the Pepsi Refresh Project that rewards individuals with refreshing ideas or the Fair Tweets campaign by Ben & Jerry’s. What do they all have in common? 1. A great cause 2. An innovative idea and 3. Huge participation that led to success.

While there isn’t a success formula that you can reproduce, the one thing that stands among all successful marketing campaigns or causes is that there is something for others to talk about – a common passion, a common interest, a common curiosity or even a common anger like the recent lashings against designer brand Versace.

Having that said, it is not the level of innovation that draws people together (although it contributes to its success) but the level of the common ground established.

A community is a powerful ‘being’, be it offline or online and today’s social media networks makes it so easy for one to start their own community. It is no wonder why businesses jump unto the bandwagon almost immediately as they recognize the need and the power of having their very own community.

It was all over the news – Malaysia, the country I live in became famous over the weekend as it was broadcasted globally due to a recent event named Bersih (clean) which involved a peaceful rally in the heart of Kuala Lumpur demanding for a fair and clean upcoming election. You may have only heard about it and perhaps are aware of what happened during the rally but what caught my interest most was how the entire cause was promoted heavily over social media networks such as Facebook and Twitter weeks before. 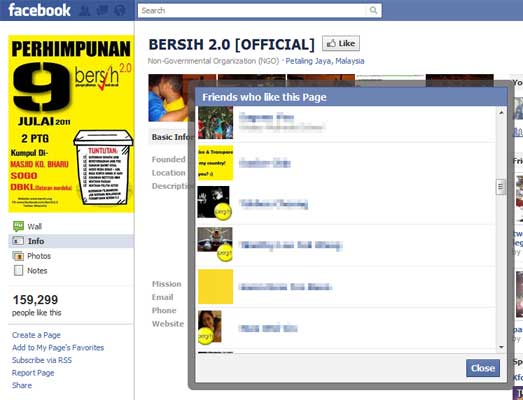 You’ll realize that the cause not only drew close to 160,000 fans but people also spread the cause willingly because it was something they can relate and resonate with, to the extend that they opted to place a badge on their display pictures (as seen in the screen shot above) to indicate their support.

What happened on Twitter? Well, you can simply search the hashtag #bersih to find out for yourself. All I can say is that the tweets flew by so quickly that I can’t even read them (and I thought I was well trained on #blogchat).

On top of that, Malaysians in other countries such as Taiwan, Melbourne and Singapore also ‘participated’ in the rally by gathering where they’re at to show their support. The medium of communication? Social media. Live updates on Facebook, Twitter and even recorded videos on YouTube.

From a business viewpoint, that is definitely a success story as word-of-mouth has taken its course and in this case, internationally.

What is it in your cause that causes others to resonate?

This is the question you should be asking yourself whatever your cause is, profit or not.

Have that answered, then all that’s left is to identify the right communication medium to spread the word.

Is there a specific cause that strikes you the most? What is it that draws you to it?