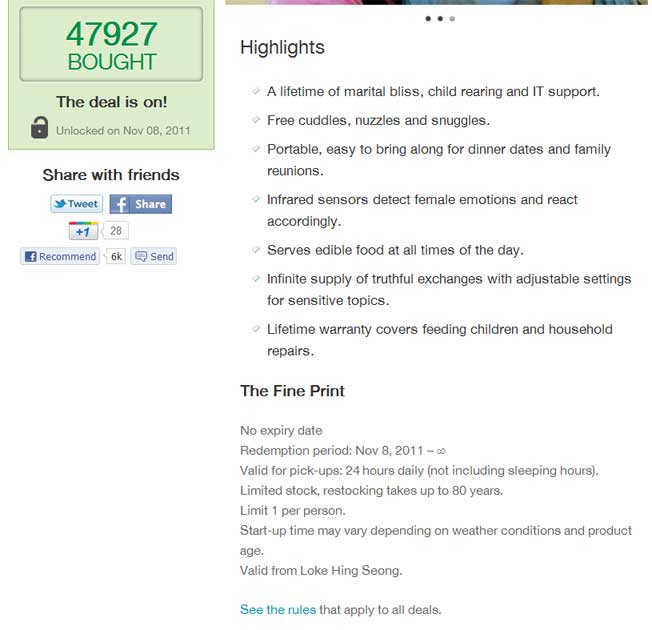 Okay, this isn’t exactly a brand but it won my vote for being innovative – this guy proposed to his girlfriend using Groupon.

How did it work? He ‘sold’ himself by publishing his deal on Groupon Malaysia, knowing that his girlfriend checks Groupon on a daily basis. The deal garnered almost 48,000 ‘buys’ which indicated the support he received for the proposal. The girl said “Yes”.

4 things Marketers can learn from this proposal:

How many marketers out there actually sit down to really understand their target audience? I ask this because it is tough. Many businesses out there want to expand too soon, without thoroughly understanding their existing audience and it goes beyond just demographics. What are their behavioral patterns online? What are their interest? The closer you get the better it gets, just like how the guy knew the girlfriend checks out Groupon every morning without fail.

#2: Don’t limit your marketing tools even before it starts

A common scenario
Client: I want a Facebook campaign.
Marketer: Sure! Let’s do one.

I must admit I fall into that once in a while too, simply because it is the easy way out. However the real question to ask is: Will _________ be THE effective tool? Could there be a better tool out there that your target audience is using? Many pick Facebook / Twitter simply because it has a huge user base. But let’s face it – how many will actually participate in your marketing campaign? Think of other tools that can make your campaign fun and memorable outside of the usual Facebook.

Mark Hughes in his book Buzz Marketing says that there are 6 buttons to get people talking (buzz): the taboo, the unusual, the outrageous, the hilarious, the remark-able and the secrets. In the case of the Grouposal, it is the unusual – and it generated more than 6,000 shares on Facebook alone. How’s that for a proposal? Give your campaign an angle that people can talk about.

#4: Be on the look out for opportunities to promote

Sometimes you do not need to create your own successful marketing campaigns – you can hitch a ride on the hype. Traditionally, marketers rely on festive seasons such as Christmas, New Year’s, Halloween and etc to market themselves. What about weddings, birthdays, anniversaries or proposals such as the above? This hair salon saw the opportunity to promote themselves using this proposal that was stirring much buzz.

What do you think of this Grouposal? Is there anything else that can make a better campaign?

2 comments on “Brand Focus #10: A Grouposal and 4 things Marketers Can Learn From It”